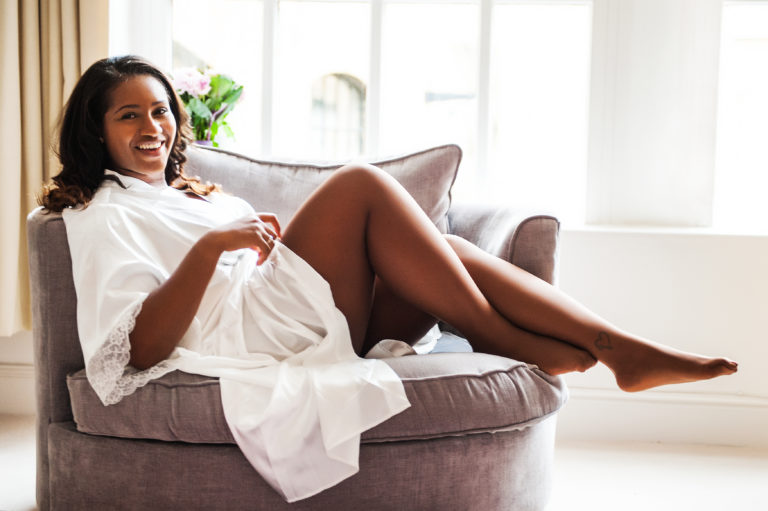 Nubian Skin was founded by 32-year-old, British-born Ade Hassan. Her international upbringing across the UK, Nigeria, the Middle East, and the USA has gave her a global perspective, which continues to influence her today.

After completing her higher education in the US and the UK, Ade entered the corporate world. She worked at various finance and consulting institutions, all the while harboring her entrepreneurial ambitions. Thoughts are different than actions however, as comfort with a steady pay check and an expanding collection of shoes put the idea on hold; that is, until an apt reminder came in the form of a birthday card from a close friend in 2012. “It’s time to start living the life you have always imagined,” so she did just that!

In spring 2013 the old business plans were dusted off, domains were bought, and the Nubian Skin journey began.  It has not been an easy process, but her dream is coming to fruition.  To quote Ade, “My nude isn’t the nude I see in shops.  Despite the reality that women of color have the same needs as all women when it comes to lingerie and hosiery (and spend the same of their hard-earned money), the industry simply doesn’t cater to us.  So I thought, it’s time to rethink the definition of nude.”

Enjoy my Q&A with this innovative entrepreneur!

Natasha: I love the overall aesthetic of the site – how did the look evolve into its current form?

Ade: I had a very clear vision for what I wanted it to look like. When we launched a couple of years ago, I had basically drawn on a piece of paper what I wanted it to look like for the developers. They were amazing in making that come to life and their suggestions fit in seamlessly with what I wanted. They took the time to understand what I wanted. Once they saw the images they were like “Right, we get it.” As things evolved, obviously we have shot different campaigns and all of those images have fit in pretty seamlessly with what we had existing because the ethos was always the same.

Natasha: At what point did you decide that your idea had legs for you to pursue seriously? (What were some things that you viewed as strong signals that it was worth the investment in time and money?)

Ade: I was looking for products myself and couldn’t find it. I didn’t launch until three years after I came up with the idea and every time I researched it, or looked for something, it just wasn’t there. I knew that countless women, like myself, wanted that and needed it. In the end, I knew there was a need. Anybody that I spoke to about it said “Yes, of course, that makes absolute sense.”  It was belief in my ability to do it and a belief in the concept which made me take the leap and go ahead with it.

Natasha: What did you find most surprising about the business of fashion?

Ade: I’d say branding in the business is so much more work than you would realize. With the fashion industry, specifically new brands, there are two things that I’ve been a bit surprised about. One is the whole influence of fast fashion the fact that we want stuff now and that makes it very hard for smaller brands to get their foot in the door because once you manage to get the money to come up with something people are like “Oh right, where is the new thing?” and you’re like “Hold on a minute! This took a lot of investment and a lot of energy.” The whole movement of fast fashion makes things difficult.

The other thing is the terms. If you’re supplying to a large retailer, that’s an amazing thing for a brand. But 10-20 years ago, a shop would say “Okay, we are going to pay you 50% up front and then when you supply us with the goods you’ll receive the rest” so you have the money to develop your collection. Nowadays, that isn’t the case, so it’s very hard for small brands to make it and survive because you’re getting hit from both ends, by the consumer and retailer. They have incredibly conservative margins and don’t want to take big risks.

Natasha: I’m personally so excited to see you expanding into the curvy market – how has the reception been generally?

Ade: With the hosiery, which we already released, people were so into that. They were like “Oh my gosh- I can’t believe it!” that was amazing it was great to see some validation and that the demand was there and that people wanted it. With the (Fuller Bust?) people have been really patient because, obviously, it’s taken us a while but also we had so many people say “Yes, when it’s out, we’re getting it.” It’s great to see that as well and the reception to the idea.

Natasha: Where have you seen the most success in terms of marketing strategies you’ve used?

Ade: Most of marketing is organic with social media and that’s been fantastic for us. We tested the waters with traditional media and there was no return on that so that was a big lesson learned. Social media is key for us. We are strongest with Facebook and Instagram. We’re looking at strategically partnering with blogs and websites. We want to pursue avenues where we know our market, instead of shooting wide for broad knowledge or recognition. It’s about figuring out where your target audience is or what they read and meeting them there.

Natasha: What is your biggest market and how does the US rank on that list?

Ade: The US is our biggest market currently. We also do well in the UK, as ASOS is a big buyer of ours. But the UK is a fraction of the size of the US.  We are expanding and Nigeria has been good for us. We are also spreading to places in the Caribbean and Europe so we’ve trying to build that up. The US shows us a lot of love!

Natasha: Do you have a overwhelming best selling item and or tone?

Natasha: Nubian Skin is making all the right moves – the original concept, expanding into plus sizing, and now the Africa collection, where do you see the brand going in the next 5 years?

Ade: We hope it becomes a household name. I’d love it to get to the point where people aren’t going “Oh, I don’t really know where to get my skin tone” but that they know where to get it. I also want to expand our customer base and brand name recognition and, of course, continuing to listen to people and see what works to give them more of exactly what they want and need and what works for them.

Natasha: If the idea for Nubian Skin never happened, what direction do you think your career would have gone?

Ade: Well, I might still be working with my husband which might be lovely! I’ve always wanted to be entrepreneur so I probably would have still pursued entrepreneurship but can’t say what exactly.

Ade is the perfect example for why so many of us get in to entrepreneurship. She saw a need in the market and made a product to fill that clear void. Is there something you want that isn’t being offered? Can you change that and fulfill some life-long dreams in the process?

Make sure you follow and support Nubian Skin on: